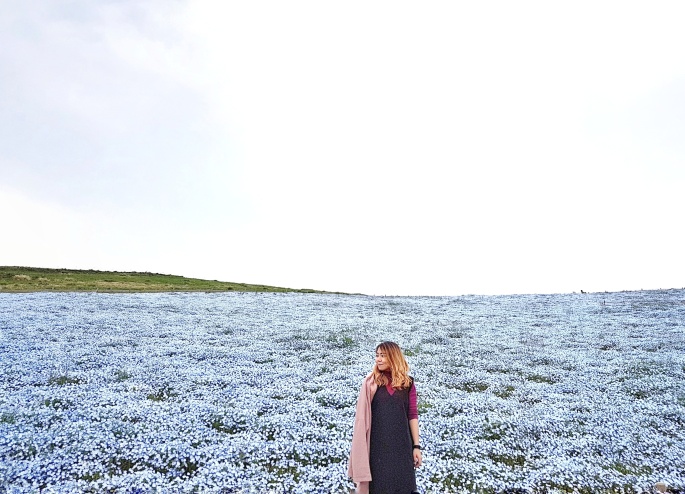 Taking advantage of the beautiful spring weather, we visited Hitachi Seaside Park located on the Pacific Ocean side of the Japanese coast in Ibaraki Prefecture.
About 130 kilometers northwest of Tokyo. 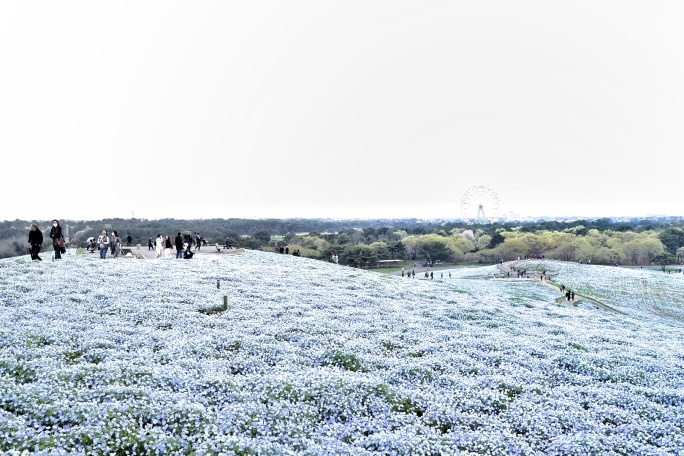 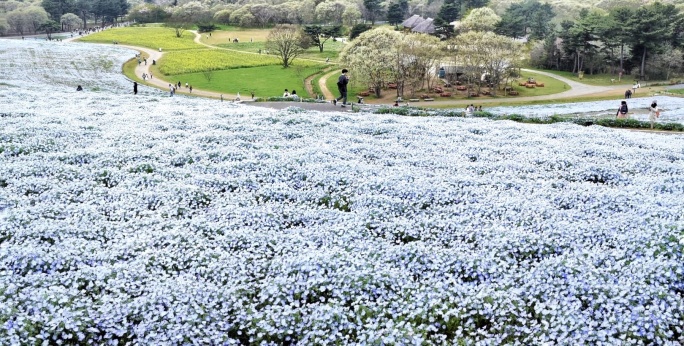 Isn’t this view from the top incredibly gorgeous? 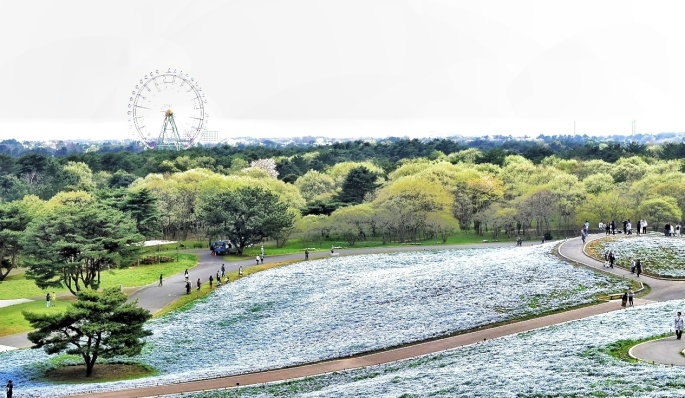 Covering an area of 190 hectares, Hitachi Seaside Park is home to a variety of colorful flowers and grasses, as well as numerous other attractions, including an amusement park, cycling trails, a forest athletics field, BBQs surrounded by nature, food vans and cafes. But with the emergence of Nemophilas around mid April to beginning of May, it takes you to a whole new level. 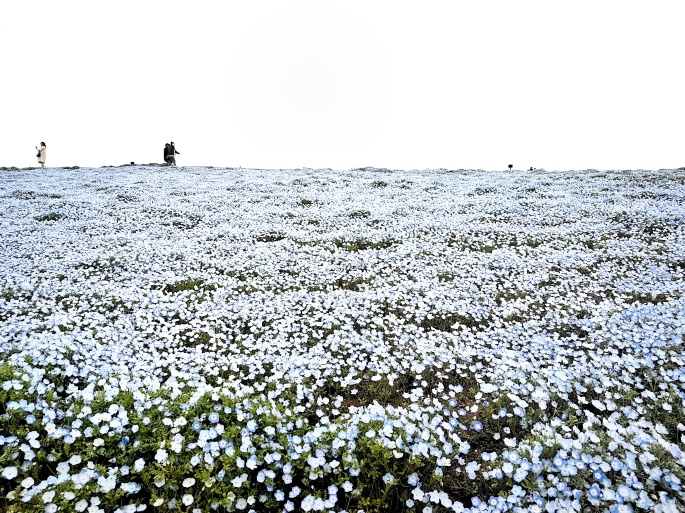 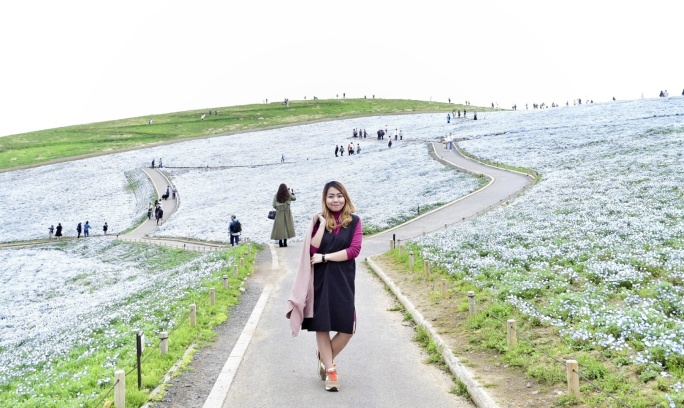 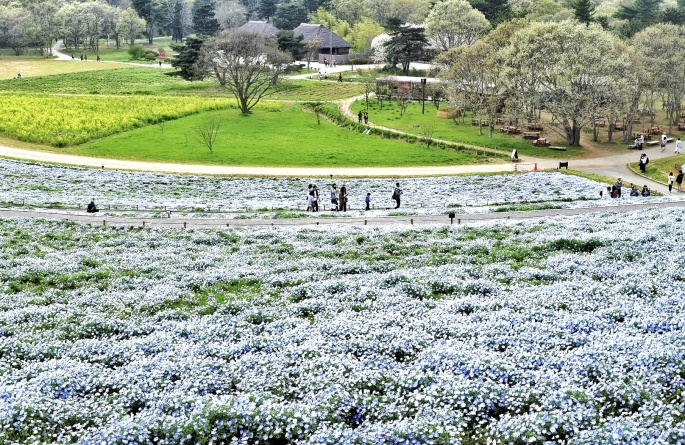 It could have been perfect when there’s no longer green but all light blue Nemophilas all over the rolling hills. If we only arrived 5 days later, that is its full bloom, it would surely be a spectacular sight ever! But still, aren’t these gorgeous enough? 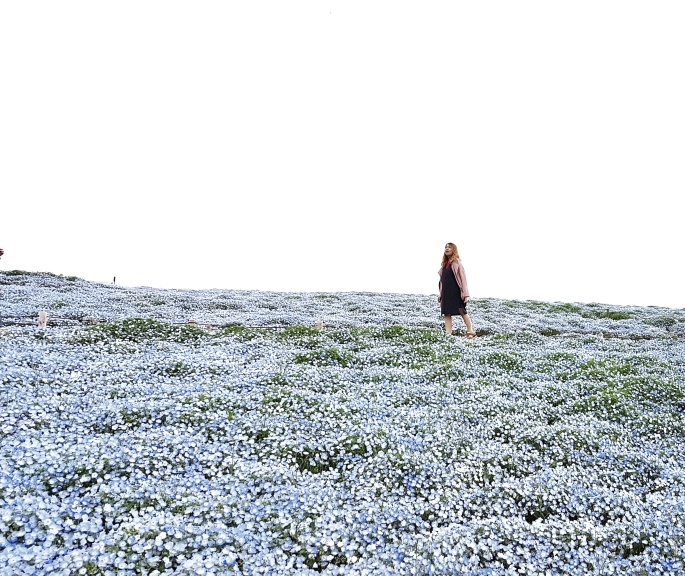 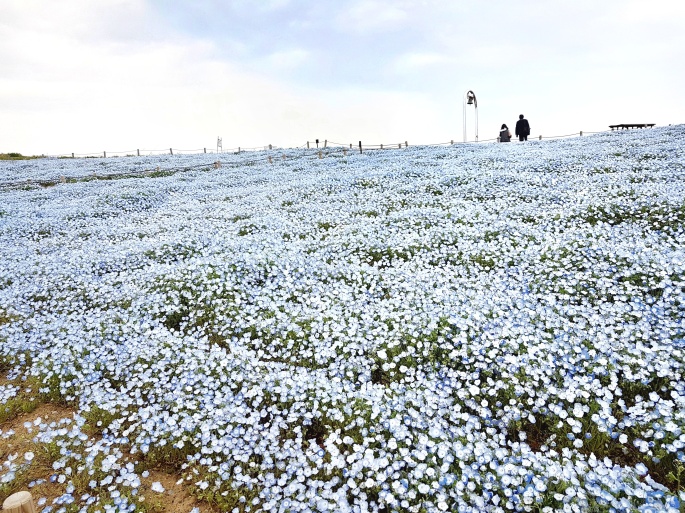 The rolling hills has been magically transformed by the sea of blue flowers which blends in with the sky. What a magnificent dramatic natural event. No wonder it has become a famous scenic spot and gazillions of tourists flock even more on its peak bloom which happens around the last week of April to 1st week of May. 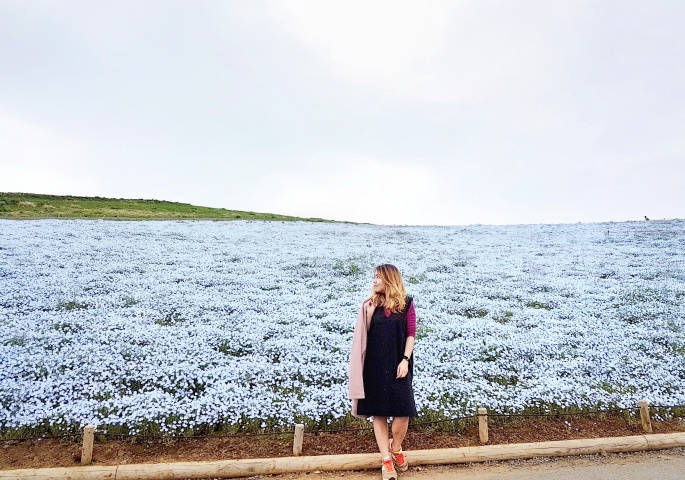 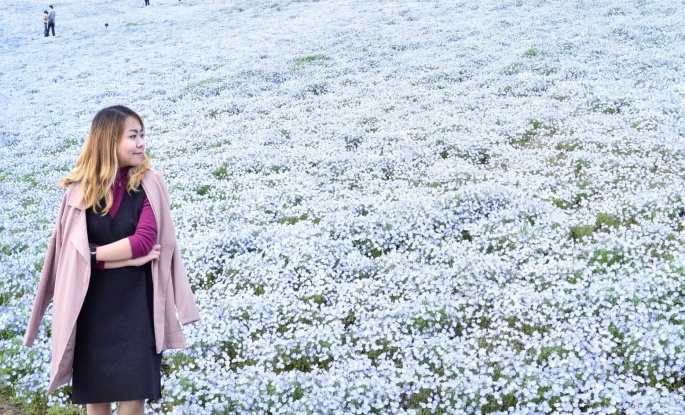 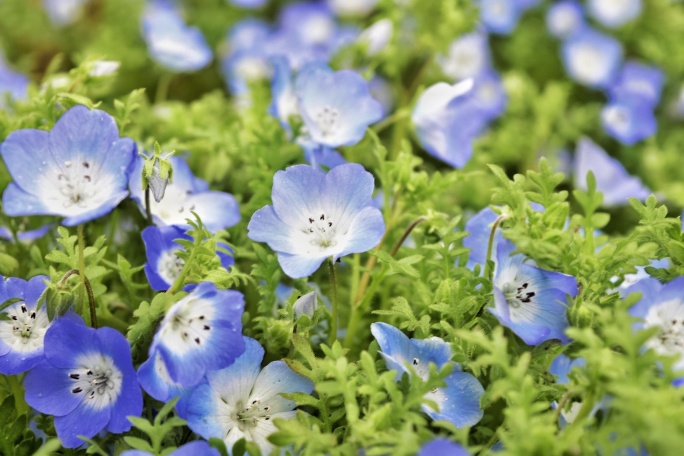 A closer look of this beautiful baby blue eyes, Nemophilas! 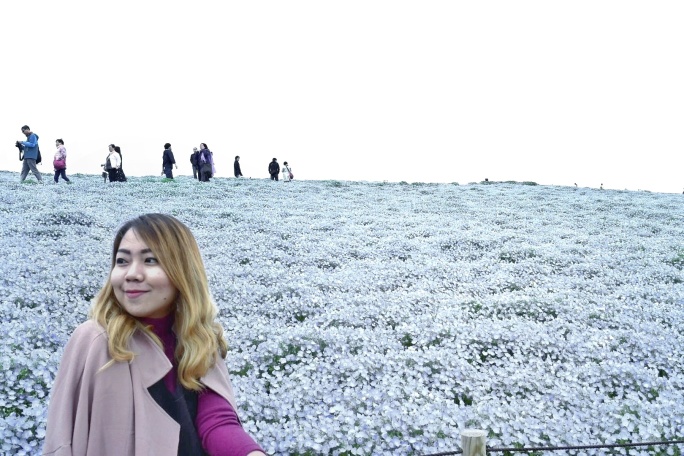 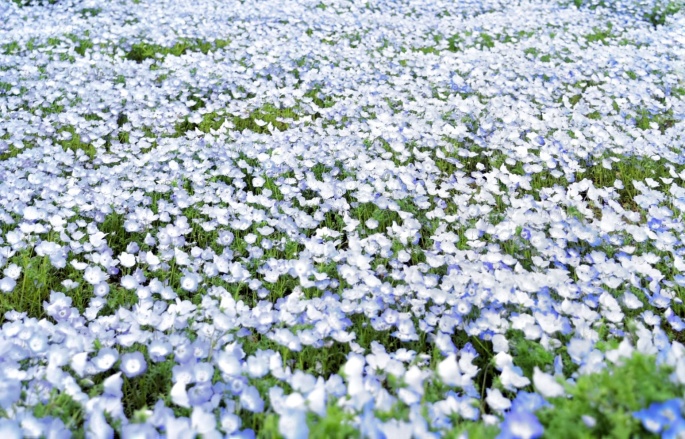 I happily joined the throngs of people, and strolled leisurely around the area snapping way too many pictures. Forgive me. lol! 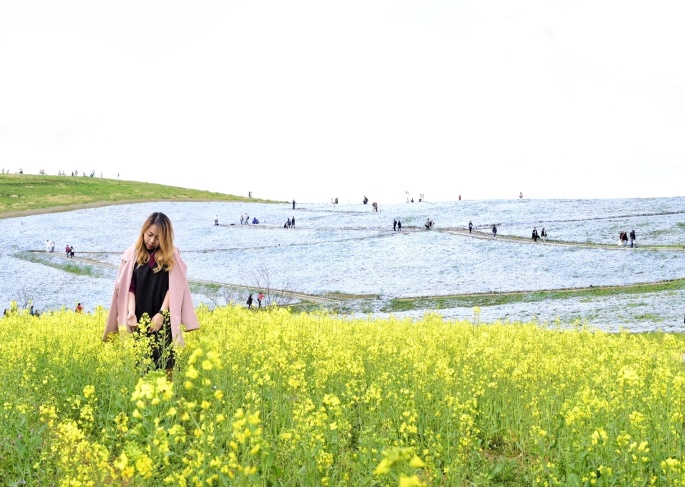 And here’s the yellow Nanohana from the foot of the hill and those baby blue eyes like a backdrop. 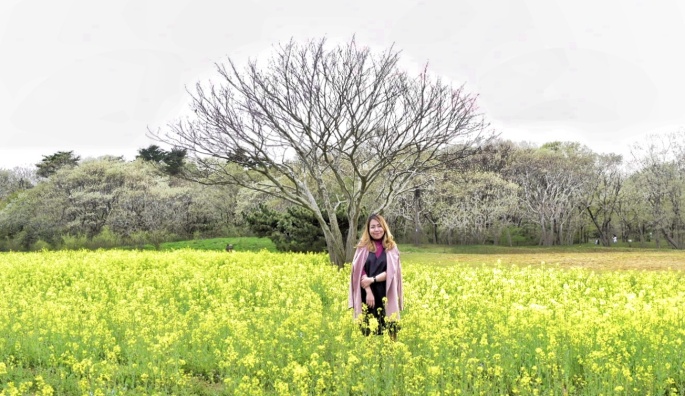 Other flowers abound in the park, so after spending so much of my time with the Nemophilas. What about seeing Narcissus and Tulips? 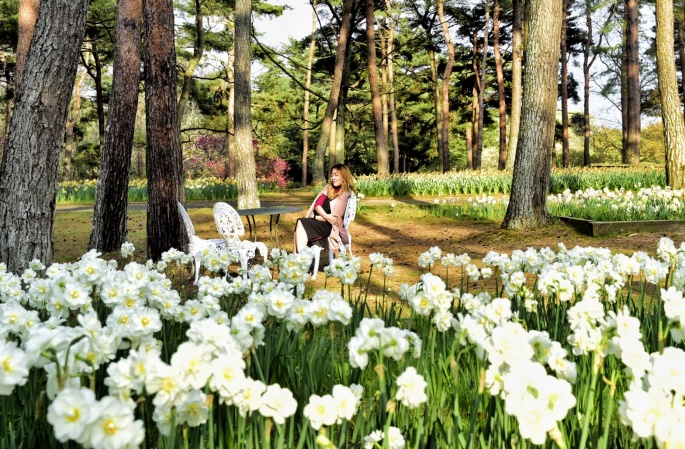 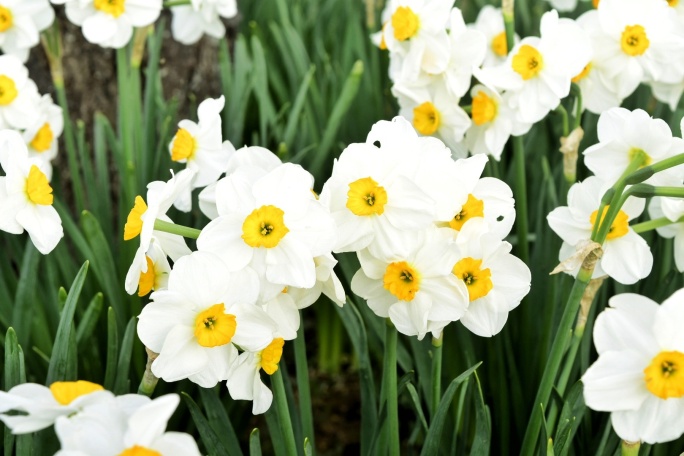 So beautiful that I couldn’t resist snapping too many photos. 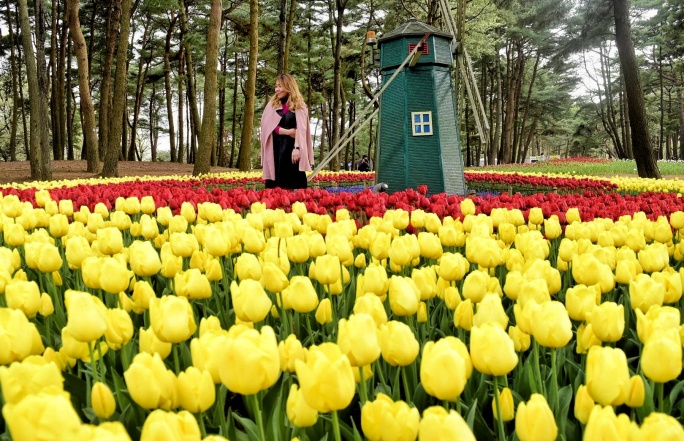 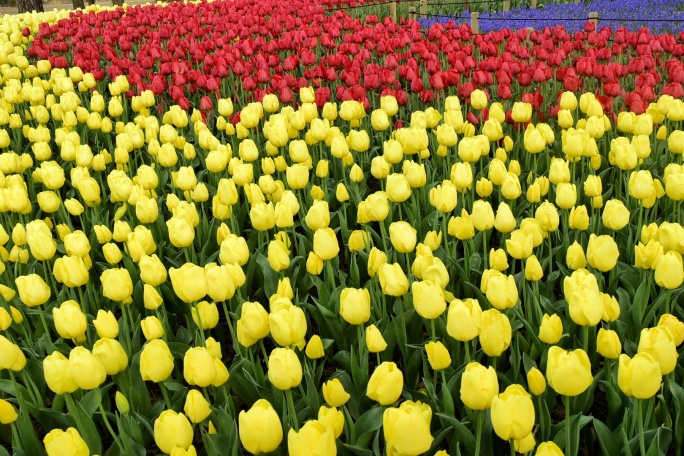 The tulips were spectacularly planted in shapes and undulating curves. There are over 200 varieties of tulips to enjoy and with so many varieties, it was hard to decide what to take pictures of first! 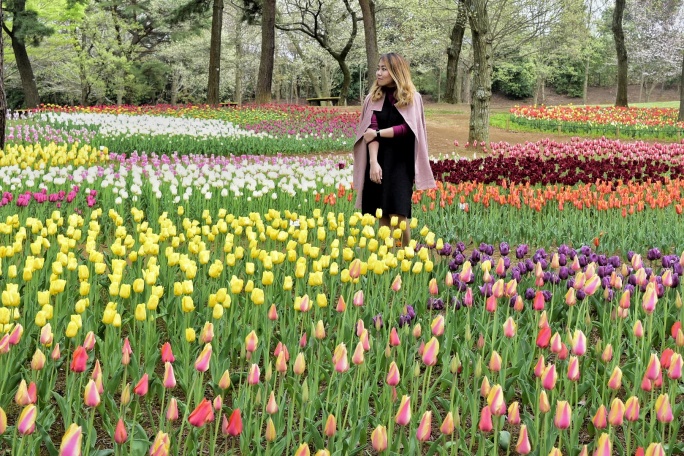 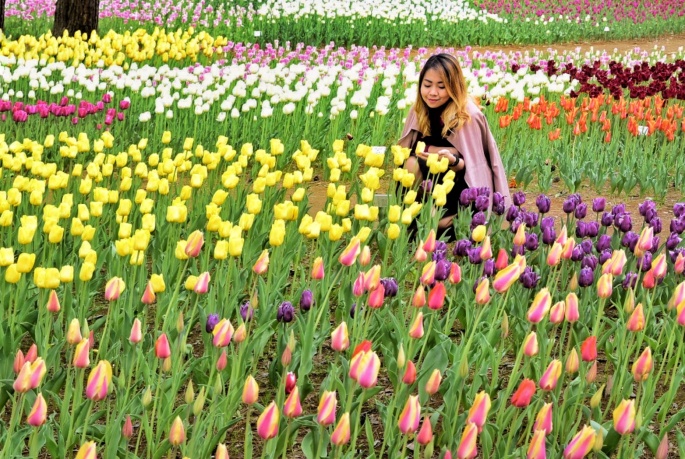 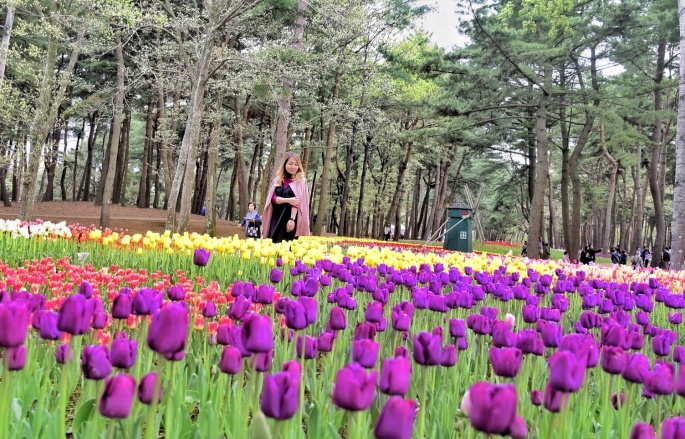 Hitachi Seaside Park can be reached by train from Tokyo, (Shinagawa, Tokyo or Ueno Station) in around 90 minutes by limited express train about 3800yen(50sgd/1700php) one way or in around 2.5 hours by regular trains 2270yen(30sgd/1000php) one way. Then get off at Katsuta Station from where the park is a 20 minute bus ride. Park admission costs 410yen(5sgd/180php) 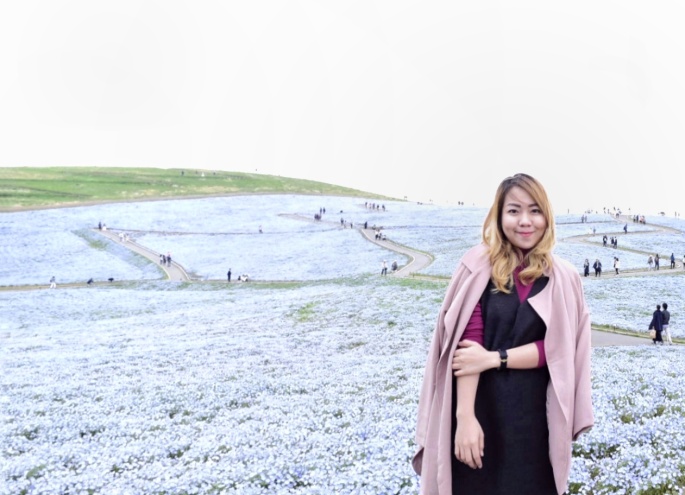 If you can’t make it on Spring time, then the Red Cochia in Autumn is a die die must-see! 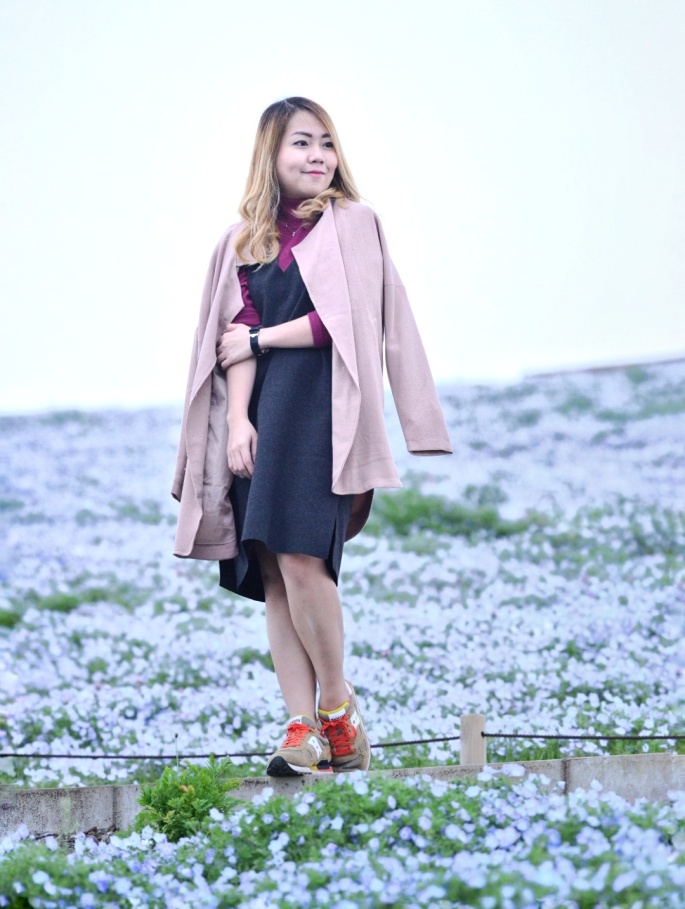 Nurse by the day, hobby blogger by night. A high-spirited young woman who always find beauty in things that are odd and imperfect. Join her as she writes about her travel tips & stories, thoughts on frugality for fashion & beauty and bold personal reviews of all sorts.